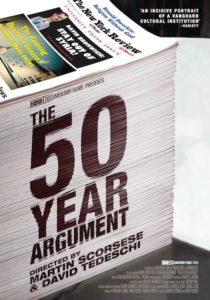 The 50 Year Argument is a documentary film by Martin Scorsese and co-directed by David Tedeschi about the history and influence of the New York Review of Books, which marked its 50th anniversary in 2013. The documentary premiered in June 2014 at the Sheffield Doc/Fest and was soon screened in Oslo and Jerusalem before airing on the British Arena television series in July. It was also screened at the Telluride Film Festival and the Toronto International Film Festival and was seen at the New York Film Festival, in September, and at other film festivals. It first aired on HBO in September 2014 and was given other national broadcasts. It had a limited theatrical release in Toronto in 2015.